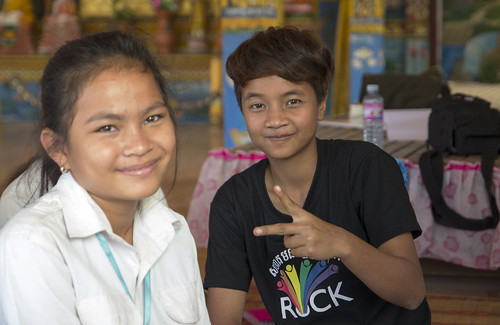 Previously, I had an appointment with Srun Srorn, an appointment that lasted an hour longer because it was so interesting. I will try to report everything tidily here. But for several reasons it was inspiring.

Curious? Have a look at the web sites of the projects he runs: CamAsean and 10December.org 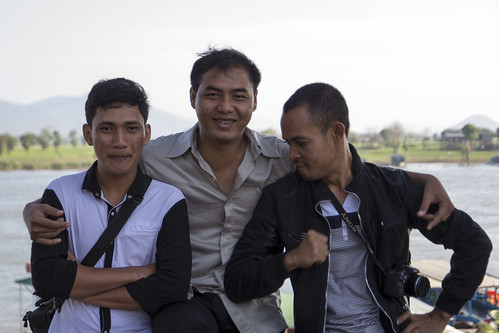 Initially I wanted to write a blog about this encounter, but two days later I was with the men (see photo above) on the road to the capital of Kampong Chhnang province. A small town with the same name. A few years back Srorn tried to give the LGBT movement a boost in this province. For now it is mainly a LBT movement. In itself special. The gay men and transgender women are not active in the movement yet. Heterosexuals are already committed to the cause.

The most extraordinary I experienced during the trip to Kampong Chhnang was the workshop Srorn gave to a lesbian soccer team. The special thing about the team is that it is trained by a trans man. The team itself consists of two-thirds of lesbians and trans boys (girls who want to be boys).

With my Western eyes I saw two thirds straight looking schoolgirls in uniform, with long hair in tails and one third lesbian looking girls with short hair. But here I was mistaken apparently. The short-cut girls where mostly transgenders (trans men), a few where lesbian. But most ‘long hair school girls’ who were lesbian where not yet ready to come home with their hair cut. 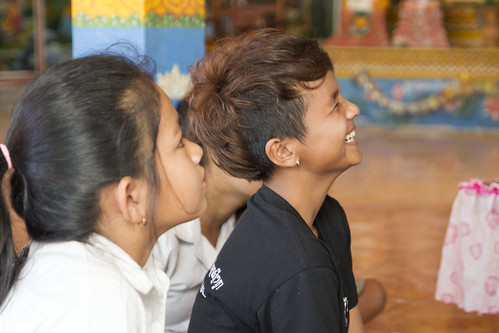 To me, here (in Cambodia) it was pretty clear: with both gay men and lesbian women there are the so called ‘long hairs’ and ‘short hairs’.To be honest: I am not sure of anything. But there is a difference between ‘short hair trans men’ and ‘short hair lesbians’. But quite frankly: what does it really matter how people look or what name they give themselves? More and more we will experience that the boundaries between sexual identities are not as absolute as we thought for years.

The reason for the trip to Kampong Chhnang was the conversation I had earlier with Srurn Srorn about the possibilities to continue the work of the Emergency & Education Fund for HIV positive LGBTs. Srorn is way ahead in strategic thinking compared to other LGBT activists. Where others embraced the human rights aspect in the LGBT working field only when donors explicitly demanded, he already incorporated it into his work.

Just some observations: he often refuses to take the money for projects. He is hired as a consultant and with that income he pays the projects. I found that with every expenditure he consistently asked for receipts, which were kept by another volunteer.

He is, as already mentioned, a strategic thinker who does not work from an ivory tower. This already cost him a several jobs when he wanted to question the target groups itself to their needs rather than to impose policies from above.

Where nobody ever cared for the needs of the lesbian sex workers (who work for straight customers) who were infected with HIV as result of their work, he will try to help them. There is room in his projects for transgender women who get caught by the police, accused of robbing.

He is building alliances with groups of straight students, involving them in the fight for equal rights for LGBT’s. In Kampong Chhnang he discussed with the school principle the rights of trans boys who were expelled from class because they refused to wear skirts. And succesfully, now girls and trans boys can choose what to wear: trousers or a skirt.

And besides all this Srorn is also busy to  help poor students in Kampong Chhnang. Please have a close look at this photo: 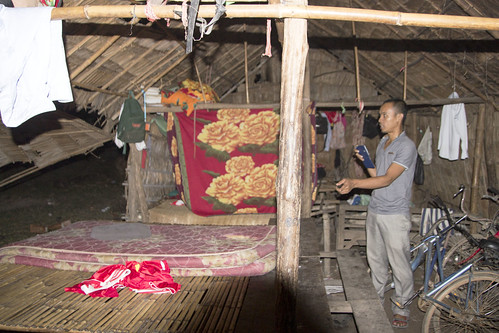 In this housing the students – both boys and girls – sleep on the school grounds. See more photos under this blog post. The best students (more money is not available) will get financial support from his project so they can continue their study in Phnom Penh.

Soon bicycles will be collected to hand over to some students (girls) because the housing is not safe for them and the distance from home to school too large. USD 50,- for a bike is an amount they cannot spend. I already handed over my bike. We brought clothes for the students. Soon Srorn will start to raise money in order to build stone housing at least for the female students so they have a safe place to sleep.

For our project (UNTENU, the Emergency & Education Fund for HIV positive LGBTs in Cambodia) Srorn will keep an eye on people in need and he will prepare the plans and projects from now on. Per case we will discuss how much is needed and per case we decide how much UNTENU will contribute.

I explained Srorn everything about our target group and goals and objectives. the reason to decide from now on per project is to prevent the abuse of funds.

In The Netherlands we don’t think of lesbians when talking about HIV. Prevention wise that might seem logic, because in the Western world there aren’t many HIV positive dykes. Nothing safer than lesbian sex. But lesbians involved in sex work (for marginalized groups in Cambodia often the last way to earn a living) HIV is a reality.

And that reminds me of a conversation I had with Sister C (learn more about Sister C here), who stayed as Gary  in the same  place as I did. We talked about this subject and he said: “We owe the lesbians everything“. This in respons to the exclusion of lesbians from the target group previously by the coordinator for UNTENU at CPN Plus.

Gary was fully right about this. During the AIDS crisis, when the gay community sufferd seriously because of the many men who where ill or died, the dykes where there to support us, they where the ones who nursed the ill gay men, who gave comfort to the people in their last hours before they died. We do owe them a lot. That is why I am so happy that from now on our target group is HIV positive LGBT’s instead of  HIV positive MSM (Men having Sex with Men) en TG’s (transgender women). HIV positive lesbians and trans men who are in need of emergency aid or education are included from now on.

I am sure I forgot to mention things, but at least I have hope for the future (again). And all the work is not done yet, more appointments to come, but with the new course of action UNTENU is no longer bound to a single NGO. Individuals or NGO’s may submit requests for a project which will be judged on their merits, before proceeding to funding.